Symptoms and Management of Hypothermia

Hypothermia is defined as a core body temperature of less than 35 0 C.

It may be missed in patients who present for other reasons, unless it is specifically looked for.

A range of generally accepted drug and other treatment modalities used to manage normothermic patients will often be problematic in the hypothermic patient and may require modification.

In warm blooded animals, the hypothalamus stimulates a compensatory response to cold exposure by activating:

Shivering can increase metabolic rate up to 5 times, producing increased endogenous heat, but ceases once glycogen stores are depleted or the body temperature falls below 30 ° C.

As the body core temperature lowers from the normal range there is progressive organ dysfunction and eventual death.

The level at which this occurs varies between individuals.

Hypothermia is defined as a core body temperature of less than 35 0 C.

It is classified into three groups:

The body copes with various thermogenesis compensating mechanisms including shivering. There may be some mild slowing of all physiological functions.

Here there is a progressive failure of thermogenesis compensating mechanisms.

Severe: A core temperature of less than 29 0 C.

Compensatory mechanisms fail and the body temperature approaches that of the surrounding environment, (poikilothermia).

Although hypothermia is most common in colder climates with environmental exposure, severe accidental hypothermia can also be seen in the metropolitan regions, with infants, the elderly and the socially isolated being at highest risk.

The following is a guide. In practice there can be wide individual variation, which may in part be related to previous acclimatization.

Continuing CVS depression, with the development of arrhythmias, including:

In severe hypothermia there is complete failure of thermoregulation.

The body adopts the temperature of the surrounding environment (poikilothermia) and loses the ability to rewarm spontaneously.

In a field setting, where measuring core temperature is not possible, “moderate” and “severe” may be grouped together (as “profound”) in distinction to a “mild” hypothermia, as they typically share the readily assessed clinical features of absence of shivering and an altered mental state.

The pharmacokinetics and pharmacodynamics of many drugs,including adrenaline and insulin, are substantially altered or unknown at low body temperatures.

2.Resistance to electrical defibrillation or cardioversion.

3.The myocardium becomes “irritable” and rough handling of the patient may result in arrhythmias including VF.

Less commonly, the following have also been reported, however the direct causal relationship with hypothermia is less certain:

Factors which may identify the Non Salvageable Patient: 1

The following factors have been put forward, although their clinical utility is questionable.

A core temperature less than 6 0 Celsius.

A core temperature less than 15, 0 Celsius if there has been no circulation for > 2 hours.

Development of the J or “Osborne” wave: 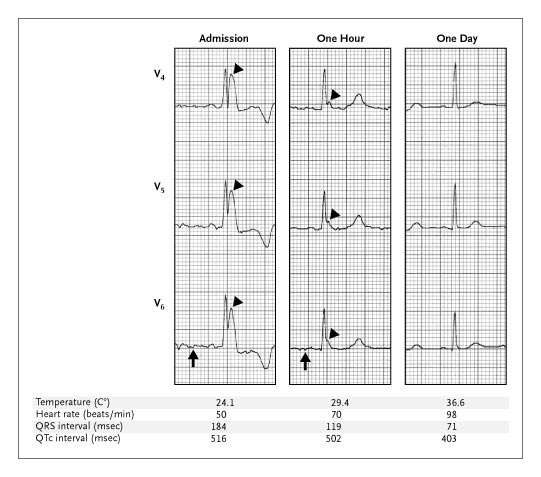 This is an extra upward deflection between the R and the T wave. It is often fused with the downstroke of the QRS complex, (see above).

Its rounded convex upward contour helps distinguish it from an RSR pattern. Together with the spike of the QRS, may form a typical “spike and dome” appearance.

It may be confused for a T wave with a short QT interval, however the later actual T wave will still be seen. This T wave may be inverted.

J waves, although seen in hypothermia, are non-prognostic, and non- specific.

Prolongation of all phases of the cardiac action potential, including the QT interval with a subsequent risk of Torsade

Hematocrit may be increased due to hemoconcentration (secondary to the cold diuresis).

Hyper or hypoglycemia may occur. Muscle glycogen is the substrate preferentially used to generate heat by shivering and so all hypothermic patients will need glucose.

Additionally, insulin is less active at temperatures less than 30 0 C and this may result in mild degrees of hyperglycemia.

Note that it is currently recommended that the ABG results should be interpreted at face value, rather than attempting to adjust them according to the patient’s temperature. 2

Other investigations are not routinely required in hypothermia. They should be done as clinically indicated.

Patients with profound hypothermia will usually have an altered conscious state.

The threshold for CT scan of the brain should be low, especially if the patient does not improve with rewarming.

If the patient does not respond within a reasonable time frame, secondary pathology or indeed the causative pathology should be sought with a CT scan of the brain.

1.Immediate attention to any ABC issues.

Volume will generally be needed (due to cold diuresis).

hese should be warmed.

Sodium chloride 0.9% solution warmed to approximately 40 to 42 °C is the preferred fluid choice, and should be administered cautiously as the patient rewarms and their intravascular space expands.

A relative level of hypotension can be normal in hypothermia – it is important to be aware of this and to regularly reassess fluid requirements as the patient rewarms to avoid intravascular fluid overload.

Glucose is required as an energy substrate in all hypothermic patients. If glucose cannot be taken orally, then some should be administered intravenously. 5

Electrolyte concentrations may change rapidly and unpredictably with rewarming, and should be monitored closely. Any electrolyte disturbances should be corrected.

Rough handling especially in the profoundly hypothermic may precipitate arrhythmias

Body core temperature may be measured at a number of sites, including esophageal, tympanic, bladder and rectal.

Infrared tympanic thermometers are unreliable in a field setting, however they do seem to correlate well with core temperature in hospitalized patients, (possibly because most hypothermic ED patients have cooled relatively slowly allowing temperatures to equilibrate throughout the body).

An oesophageal probe is the most reliable method, but typically this is only possible in a ventilated patient.

End tidal CO2 monitoring in intubated patients. Recordings will read lower than at normal temperatures and are therefore more difficult to interpret.

Note that central lines should be avoided in the profoundly hypothermic patient (due to the risk of precipitation of arrhythmias) A short femoral line is a good alternative if central access is required.

6.Look for and treat as necessary any coexistent trauma / pathology.

Benign arrhythmias, such as sinus bradycardia, slow AF, other atrial arrhythmias and transient ventricular arrhythmias are common physiological responses in hypothermia and require no specific treatment other than rewarming.

Most cardiac arrhythmias associated with hypothermia will resolve spontaneously with rewarming.

Antiarrhythmic drugs are not generally indicated unless malignant arrhythmias are present. Although there is limited evidence to support any specific drug, magnesium seems to hold some promise to treat ventricular arrhythmias associated with hypothermia. 5

Rewarming is the definitive treatment.

The techniques used will depend on the patient’s core temperature, clinical status and the available resources.

Simple passive techniques are usually all that is required in these cases, providing the patient has retained the physiological capacity to shiver and to generate body heat.

They include the following:

1.Protection from the environment and especially from any wind (to reduce evaporative and convective losses)

2.Removal of any wet clothing, (water has 25 times the thermal conductivity of air)

4.Provision of an insulation blanket, (shiny side in).

This will reduce radiative, evaporative and convective losses.

5.Warm drinks, if able to be tolerated are helpful.

Here the patient’s thermoregulatory mechanisms begin to fail and so in addition to the above passive techniques for rewarming more active measures must also be taken to assist the patient in achieving a core temperature of at least 32 0 C.

This may include immersion in warm water in some circumstances (for patients who will not require any other medical interventions) or close body to body contact when in the field.

2.Forced Air-Blanket devices. The device is usually set at 43 0 C.

3.Warm bathwater immersion is discouraged in these patients, as this impairs the overall ability to properly manage and monitor the hypothermic patient.

This can be done via specific delivery devices.

Humidification of the inspired oxygen is important to help reduce evaporative losses from the respiratory tract and because dry air has relatively low thermal conductivity as compared to humidified air.

A specialized heating device is best. The heating coil in the warming device is generally set between 40-42 0 C.

Alternatively fluid bags stored in a blanket warmer may be used.

Note that IV administered fluids should never be microwaved.

Possible theoretical problems with the two external techniques (radiant heat and forced air blanket) have been said to include “the afterdrop” phenomenon and “rewarming shock and acidosis”. These concerns however have little, indeed probably no, clinical relevance.

Generally severe hypothermia responds well to a combination of all the above methods used for mild and moderate hypothermia.

On occasions, if there is an inadequate response to these measures or if the patient is particularly unstable, especially with respect to the cardiovascular system, including the “arrested” patient, then more aggressive invasive active internal techniques may be necessary to rapidly achieve a core temperature of at least 30degreesCelsius, (a level below which more malignant arrhythmias may occur).

This is the best means of rapidly rewarming a patient (up to 7.5 0 C per hour) as well as providing a circulation and oxygenation in the arrested patient.

Cardiac arrest presents a particular dilemma in the severely hypothermic patient. At core temperatures of less than 29 0 C, signs of life can be extremely difficult to detect.

“Rough handling” is said to predispose to VF or other malignant arrhythmias. The dilemma has been put that if the patient appears to have no pulse, yet has a “perfusing” rhythm (a form of PEA), then should CPR be commenced with the subsequent risk of inducing a worse rhythm such as VF?

Current consensus opinion suggests that the “rough handling” issue has been overstated, particularly in relation to intubation which is now considered safe. The issue more probably more relevant in the prehospital setting where issues such as the helicopter winching of patients to the horizontal position are encountered.

If a monitored patient appears to be in cardiac arrest with no detectable pulse, despite the presence of a “perfusing” rhythm, then CPR should be commenced. The proviso to this is that a very careful effort should be made to detect the presence of a pulse first, (at least 45 seconds should be taken to do this)

An unmonitored patient in the field is another issue. If after a very careful examination for a pulse, there is none, then CPR should be commenced. The proviso to this is that further medical assistance will be possible within a reasonable time frame.

In cardiac arrest it should be further noted that the severely hypothermic patient will be resistant to both drug and electrical therapies. If there is no initial response to these then further attempts are unlikely to succeed until rewarming has occurred to at least 32 0 C.

There are well-documented cases of complete recovery from very prolonged hypothermic cardiac arrest, and prolonged resuscitative attempts are warranted in the hypothermic patient.

The presence of concomitant trauma or illness will influence disposition for any given case.

Mildly hypothermic patients can be managed as outpatients after a period of emergency department care.

Patients with moderate or severe hypothermia will need admission, and may need admission to an intensive care unit or high dependency unit.