Effectiveness of Role Play on Attitudes to Mental Illness

EFFECTIVENESS OF ROLE PLAY ON ATTITUDE TOWARDS MENTAL ILLNESS

The problem of stigmatization of mental illnesses is one of the reasons for exclusion from the social life of ill people. The lack of substantial knowledge concerning mental disorders is conductive to emerging of stereotypes and discrimination against the mentally ill.(alex) Decades of research have established that the public holds negative beliefs about Persons with mental illnesses, among them that such individuals are dangerous, Unpredictable, unattractive, and unworthy and are unlikely to be productive members of their communities (otto).

Moreover, these negative perceptions have been remarkably constant despite advances in scientific understanding of mental illnesses and extensive efforts to improve public understanding.

It is unlikely that these negative attitudes and misperceptions emerge full blown in adulthood. Rather, they likely have their roots in childhood and develop gradually through childhood and adolescence. Psychiatrically labelled children, then, may face misunderstandings and negative attitudes by their peers. Ostracism, rejection, teasing, and damage to self-esteem, as well as reluctance to seek or accept mental health treatment, are among the possible consequences (9–12).These consequences may be particularly relevant during adolescence and preadolescence, a period in which onset of a variety of psychiatric disorders peaks and children are acutely attuned to the judgments of their peers. Accordingly, it is important to understand more about the knowledge and attitudes of youths related to mental illnesses and peers who may manifest such illnesses. (Otto)

Overall, seemed to indicate that even young children view mental illnesses as somehow less desirable than other kinds of health conditions.(otto)Role of education has been cited as integral to reduce stigma towards mentally ill.tarun .Psycho education is among the most effective of the evidence-based practices that have emerged in both clinical trials and community settings. Because of the ï¬‚exibility of the model, which incorporates both illness-specific information and tools for managing related circumstances, psycho education has broad potential for many forms of illnesses and varied life challenges. Ellen

Education is integral to reducing stigma toward the mentally ill. Nurses educators have a key role in delivering education that reduces that stigma.It is well established that experiential methods of teaching are more effective than instructional methods and are preferred by the students. Aspegren K

The effect of roleplay simulations with patients and actors has been considered in several studies. Mino

We were unable to find any studies that explored whether roleplay had an impact on adolescents of high school. In the light of the importance of stigma with in mental health and the dearth of evidence related to both how educational experiences influence attitudinal; development and the effect of role-play, we decided to explore further the effect that role-play has on attitude of adolescents. The wide spread use of roleplaying for teaching and the fact that these sessions were judged to be memorable to students further indicated that this was an appropriate focus.

No previous study has explored the effect of intervention such as role-play on high school student attitudinal development in India.

“A preexperimental study to assess the effectiveness of Roleplay on attitude towards mental illness among adolescents studying in a selected high school at, Bettahalasoor, Bangalore, Karnataka, India”.

Sample: Bettahalasur is small village located around 50 km away from Bangalore. This village has population of 3573 residing in 900 families, in which around 20% were adolescents. Moreover it has higher literacy rate compared to Karnataka. In 2011, literacy rate of Bettahalasur village was 82.80 % compared to 75.36 % of Karnataka(Census, 2011) Census. (2011). The required sample size 30 was estimated by G*Power 3.1.6.2 version based on α of 0.05, power of 0.95 and with the effect size of 0.7. Random table was used to select 10th standard students studying in selected high school at Betthalsur, Bangalore, and Karnataka.

Measures: A Socio Demographic tool was constructed by the investigators, which consists of 11 items. To assess the quality of attitude towards mental illness among adolescents, an attitude scale (likert type) was constructed by the investigators and was validated by the experts. The scale contains ten positive and ten negative items. For the items the responses given were totally disagree, almost disagree, neutral, almost agree and totally agree which was scored as 1, 2, 3, 4, and 5 respectively for the positive items whereas reverse scoring was done for the negative items. Total score ranges from 20 – 100 and is categorized into negative, neutral and positive attitude in the range of 20 – 40, 41 – 60 and 61 – 100 respectively.

Procedures: After obtaining the formal permission from the concerned school authorities, pre test was conducted followed with 45 min of Roleplay which was conducted by the IVth yr BSc Nursing students regarding the attitude towards mental illness. The post test was conducted after 7 days. Collected data were analysed with appropriate descriptive and inferential statistics.

Table: 1 – Mean, SD, ‘t’ value of attitude before and after roleplay

Quality of Attitude before and after roleplay 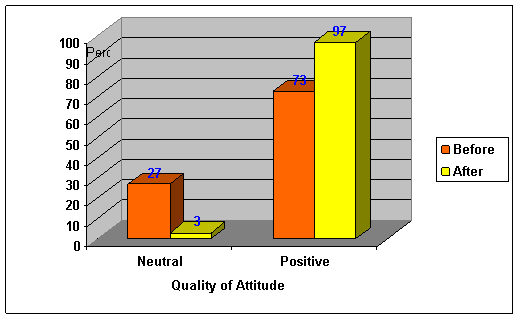 Figure 1: Quality of attitude towards mental illness before and after roleplay

Figure 1: shows that 73 % of adolescents who had positive attitude in the pre-test similar finding was reported by (Otto et al 2004) wherein he reported results revealed high agreement on many items indicating positive attitudes toward mental illness , also 90% of students agreed that people with mental illness deserve respect, that more should be done to help people with a mental illness get better, and that jokes about mental illness are hurtful and the students also expressed strong acceptance of people with mental illness. After the role-play the percentage of adolescents who has positive was increased from 73% to 97 %, similarly the neutral attitude was decreased from 27% to 3%. This result is contradictory to (Roberts LM 2008) wherein he reported that Single high-intensity routine teaching sessions such as role-play involving metal illness do not influence student attitudes.

Relationship between Selected Socio-Demographic Variables and Quality of Attitude

The findings of some positive impact on stigma scores from personal experience ,however, supports previous findings that psychiatric rotations and specific education programs can be effective in reducing stigma and suggests that one way in which these rotations work is through delivery of contact and personal experience of individuals with mental illness. Although this findings was limited, it may indicate future avenues educators could explore in the development of programs designed to reduce stigma in high school students. We recommend further research into the use of clinical placements and patient attachment exercises to provide students with these experiences at an early stage in their careers and the use of literature and film to mirror the personal experience. Further work should be undertaken to explore factors that may explain the large variation demonstrated in the student scores. It is likely that it is not experience parse that is implicated in the development of attitudes but the quality and nature of this experience. Other factors such as exposure to media images of illness have previously been implicated in psychiatric stigma, and their effect should be further explored with the high school students.

Thus the study conducted in the high school for the adolescents of high school education on the effectiveness of role-play their quality of attitude towards metal illness, reveals that it is an effective method to change the quality of attitude towards mental illness among adolescents. While the study is limited in its single site approach, we believe such teaching undertaken at the high school level is similar to that delivered at other high schools also. We encourage other schools to use this approach in evaluation of novel teaching approaches and the assessment of unintended outcomes.