The Causes, Consequences and Differences Between Pulmonary Fibrosis or Emphysema Alone

Combined pulmonary fibrosis and emphysema (CPFE) is a complicated disease and untreated disease which consists of two diseases. It is difficult for respiratory therapists or respiratory physicians to differentiate between CPFE versus idiopathic pulmonary fibrosis (IPF)/emphysema alone. There is an increased recognition of the coexistence of emphysema and pulmonary fibrosis in individuals. The association of two diseases results in chronic dyspnea, upper-lobe emphysema and lower lobe fibrosis, and severely diminished diffusion of gas exchange with preserved lung volumes. CPFE is also frequently complicated by pulmonary hypertension, lung injury and even lung cancer. This causes CPFE patients to feel have a low quality of life and a low 10-year survival rate. Currently, there are no known treatments for CPFE patients with the exception of lung transplantation. Thus, clinical evaluations are needed to differentiate between chronic obstructive pulmonary disease (COPD) and pulmonary fibrosis, and to recognize that CPFE is a unique entity by looking at the difference in radiological, pathological and metabolism features in order to find better treatment for CPFE.

About 11 million Americans have Chronic Pulmonary Obstructive Disease (COPD) and out of these, most are diagnosed with pulmonary emphysema. The etiology of emphysema found that 80% of cases are caused by cigarette smoking, which causes alveolar membranes to break down, creating huge alveoli (called blebs) that lesser surface area and weaker walls than normal alveoli. This causes the low perfusion of oxygen due to decrease in surface area. In addition, approximately 50,000 new cases of Idiopathic Pulmonary Fibrosis (IPF) are diagnosed each year.  IPF is a restrictive respiratory disease, and it is the most common of the idiopathic lung diseases. IPF causes thickening of the alveolar capillary membrane, which results in minimal gas exchange between the alveolar and the blood capillaries. Both diseases lead to the decreased efficacy of oxygen delivery.

CPFE is a combination of both IPF and emphysema. However, it is usually treated as IPF and ignored or excluded in the diagnosis of emphysema.  COPD and pulmonary fibrosis have different pathologies, metabolic pathways and radiological characteristics, and were therefore regarded as separate entities for a very long time. However, in recent years, there is some recognition of the coexistence of pulmonary fibrosis and emphysema in patients. As such, it is very important to know the differences between CPFE versus emphysema or pulmonary fibrosis alone in order to find a treatment or prevent the patient’s conditions from further deteriorating.

In the following years, studies had shown that CPFE patients have a coincidental occurrence of early emphysema and at later age of IPF, especially for smokers with many pack years.1  However, in recent studies there is a correlation between the occurrence of the combination between lower lobe pulmonary fibrosis and upper lobe emphysema. These two diseases have been observed coexisting in greater frequencies which are therefore called combined pulmonary fibrosis and emphysema (CPFE) and there is a need to distinguish them as distinct entities. There are some studies taking place to better understand the pathophysiology of the condition and find the possible causes of CPFE such as genetic factors or any biological metabolism pathways which may encourage its development. CPFE is normally caused by heavy smoking, exercise hypoxemia, upper lobe emphysema and lower lobe pulmonary fibrosis, unexpected lung volume and severe reduction of carbon monoxide transfer.2

Whether the combination of both emphysema and pulmonary fibrosis is a unique clinical entity still remains unknown. For some of the population in the medical community, it is a coincidental occurrence of two smoking-related diseases on one person, versus the coexistence of the similarities of COPD and lung cancer. However, many different studies have shown and suggested that interstitial lung abnormalities, which are normally caused by IPF, have are inversely related to emphysema in smokers. In fact, based on the chest X-Ray images, most patients who have many pack years with IPF do not have any signs of having emphysema. Similarly, most patients who have emphysema do not have any signs of IPF in their chest X-Ray. Hence, the combination of both pulmonary fibrosis and emphysema may be a direct result of heavy smoking or many pack years which reflects the uniqueness in individual susceptibilities.

Even though medical professionals tend to use chest X-Rays for any respiratory distress, as it is inexpensive and considered a fast diagnostic tool, it is unable to properly diagnose the CPFE syndrome. Another alternative would be to use High-Resolution Chest Computed Tomography (HRCT), which is the only tool to diagnose the syndrome. The CPFE syndrome consists of heterogeneous syndromes, in which syndromes differ from one individual to another and resulting in no actual definition of the syndrome for CPFE. This makes it difficult to diagnose CPFE with the current pulmonary function test, as CPFE patient results look similar to those of patients diagnosed with pneumonia. From past research and observations, CPFE is frequently complicated with pulmonary hypertension, acute lung injury and the possibility of lung cancer, resulting in very poor prognoses. Treatments for CPFE patients with severe pulmonary hypertension have not been found and have largely proven ineffective in curing the disease apart from a wholesale lung transplant.

The identification of patients with CPFE is needed due to the uniqueness and complication of the disease’s history. Since CPFE has not yet attracted the attention of researchers and healthcare practitioners, there have not been many studies focused on finding the differences between pulmonary fibrosis, emphysema and CPFE. Currently, there is no consistent way to differentiate the factors, signs and syndromes when diagnosing CPFE patients from other obstructive respiratory diseases. This has resulted in many medical practitioners failing to immediately recognize CPFE in patient’s diagnoses.

Patients with CPFE tend to be older men who tend to have many pack years of smoking. Previous studies have shown that there is no significant difference when varying the number of pack years against the occurrence of COPD such as emphysema and CPFE. However, patients with CPFE and those with COPD usually have a long history of smoking as compared to patients with IPF.  Many studies have reported that male have higher prevalence then female in having respiratory disease syndrome, and could be due to men tending to have more pack years as compared to females. It may also be due to the genes of men which predispose them to succumbing to COPD or CPFE. Even though both IPF and emphysema have proven to be more common in male smokers than female smokers, it does not necessarily mean that gender plays an important risk factor in the contraction of CPFE. More studies are needed to determine how gender differences affect this syndrome.

Till now, there are no conclusive findings for pathogenies of CPFE. There are no clear conclusions on the development of CPFE, whether emphysema and or pulmonary fibrosis progress independently or whether there are synergistic qualities between the two. There may be some mechanisms involving cytokines, beta receptors or signaling pathways which have not been discovered. Thus, both pulmonary fibrosis and emphysema may tend to occur in genetic susceptibility individuals with from exposure to environmental factors such as smoking or occupational hazard and chemicals.

A case study journal report on a male patient aged 73 years old in 2015 gives one of the more detailed analysis of Microscopic Polyangiitis (MPA), a disease that precedes by CPFE. The patient worked as a metalworker and had 25 pack years. He was admitted to the hospital due to progressive dry coughing and he was later diagnosed with CPFE. He eventually died due to complications from CPFE, which resulted in severe pneumococcal pneumonia with acute lung injury. His arterial blood gas result was normal with a fairly abnormal range in his pulmonary function test (PFT). There were clear signs of emphysema and IPF from his CT scan and Chest X-Ray (Kyoko Gocho, 2015). MPA is a systemic necrotizing vasculitis of small vessels associated with numerous types of antibodies in particular myeloperoxidase- antineutrophil cytoplasmic antibody (MPO-ANCA). Oxidation induced by MPO-ANCA may trigger pulmonary fibrosis due to alveolar hemorrhage, resulting in pulmonary capillaritis (an inflammation of pulmonary capillary). This causes pulmonary fibrosis as the alveolar capillary wall thickens (Kagiyama, 2015)

Correlation of smoking with CPFE patients

A common etiology factor for CPFE is smoking. Tobacco smoke contains 4000 chemical substances, including Kaolinite or aluminum silicate, an organic industrial material. Studies show that inhalation of this organic industrial substance will result in hyperactive macrophages, which in turn will lead to respiratory bronchiolitis and emphysema (King, 2005). Currently, there are no studies for the association of tobacco smoking resulting in IPF, other factors such as environmental factors in genetically-predisposition individuals may play a key role in resulting IPF. The association between CPFE and lung cancer may reflect the susceptibility linked to long term smoking which causes chronic smoking-induced inflammation. These were done on several other studies on the relationship between emphysemaand IPF.3,4

Patients who have acute respiratory distress syndrome such as COPD, pulmonary fibrosis or even CPFE, will tend to have more difficulty breathing due to the use of accessory muscles and the need to constantly supply supplemental oxygen to meet the oxygen level demanded by the body. For some of the patients, a high flow of oxygen is required (flow rate of more than 60L/min) to meet their inspiratory demand. Patients with CPFE have a confused and undetermined ventilation/ perfusion ratio due to emphysema causing low perfusion and IPF having low ventilation. This results in both ventilation of oxygen to the alveoli and perfusion of capillaries to be diminished, leading to dead space and shunt. Emphysema results in the reduction of alveoli-capillary surface membrane by forming a bleb that causes air-trapping, whereas pulmonary fibrosis scars the alveoli’s tissue, creating a shunt that causes ventilation of the oxygen to the alveoli to be inefficient, resulting in the patient’s body tissue being unable to get a sufficient amount of oxygen.

Other remarkable syndromes found in COPD patients are chronic cough and sputum production in volume greater than one shot full glass due to inflammation of bronchi and impairment of the mucociliary clearance, presumably due to the effects of smoking. Patients with IPF may show progressive shortness of breath, loud expiratory wheezing sounds and – if the condition is worse – cyanosis may appear on the patient. CPFE from previous clinical studies shows that it is similar to IPF. On close physical examination, by doing chest auscultation, it was found that more than 80% of CPFE patients will emit inspiratory dry crackles sounds due to the underlying pulmonary fibrosis. About 40 to 50% will have digit clubbing and poor capillary refill. 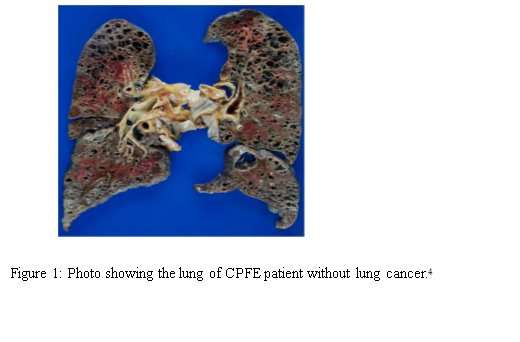 As of now, there is no consistent definition for CPFE. However, it is very important to diagnose it early. Diagnostic criteria for CPFE include radiological findings by using either chest X-Ray or HRCT – these images will appear as upper-lobe emphysema with fibrosis like blebs, lower-lobe honeycombing with subpleural reticular opacities, thick wall cystic lesions, and sometimes ground glass opacities.2

CPFE unfortunately is regarded as a unique entity and till now, it is rarely recognized as a clinical entity. Based on the GOLD standard for COPD patients, to be diagnosed for COPD, FEV1/FVC should be less than 70%. However, in CPFE patients, they normally have subnormal lung volumes and pulmonary function test with FEV1/FVC > 70%, this results being emphysema to be ignored or overlooked. Physician, healthcare workers and respiratory therapists should be aware of its existence. More autopsies should be recognized such as thick-walled cystic lesion and idiopathic interstitial pneumonia should be recognized as both of these can be found in CPFE patients but are seldom found in emphysema/IPF alone patients. A deeper understanding of the pathophysiology is needed for CPFE and the factors that causes the syndrome of CPFE should be explored further with more clinical studies so as to develop effective treatments or therapeutic strategies for CPFE patients.